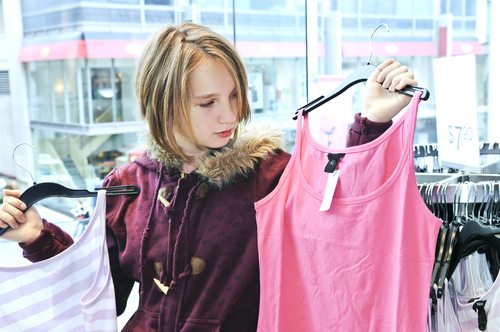 Have You Been Buying Unethically Produced Clothes? April 19, 2017 – Posted in: Fashion

Last month, a good-looking woman, who looks like in her late 30s walked into our lingerie boutique and commented that she bought all her seamless panties from Uniqlo but she had a problem – all of them lasted her for only a week before they started to get too loose to wear. I recommended her Triumph seamless panties, which in my case, had served me well for over a year. But as it costs 7 times more than Uniqlo, she said she would continue to stick with Uniqlo. Come on, I’m sure you can tell which brand is better value for money, can’t you?

ARE YOU A FAN OF FAST FASHION?

But now consumers do not equate better value with better quality. They only look for best bargain at lowest price. Fast fashion labels, like Uniqlo, Forever 21, H&M and Zara are churning out new trends on a weekly basis, leading to a culture of disposability. Garments are now so cheap that people don’t think twice about disposing them.

The fashion industry by design is already constantly changing with each season, four times a year, but fast fashion changes weekly. It’s not uncommon for shoppers to wear an item once or twice before throwing it away for next week’s style, due to the poor quality of many of the clothes causing them to go out of shape or tear apart after a few washes.

People are going to fast fashion stores weekly and they are buying, buying and buying too much. In Singapore, you can buy a pair of jeans for less than what it costs to buy a set meal at McDonald’s. Roy Morgan Research has found 1.7 million Australians are buying at least one pair of jeans in any four-week period. There are also disturbing statistics on the impact the fashion industry is having on the environment. In Australia alone, more than 500,000 tonnes of textiles and leather end up in landfill each year. *1 According to statistics from Japan’s Ministry of Economy, Trade and Industry, for every 10 kilograms of clothes bought here, nine kilograms are thrown away. *1

DO YOU KNOW YOUR CLOTHES TAKE 200 YEARS TO BREAKDOWN?

Clothing made from polyester, which is essentially a plastic, takes up to 200 years to breakdown in landfill. Clara Vuletich, a designer, researcher and co-creator of a sustainable design methodology used by brands such as Gucci, said natural fibres such as wool and cotton are not designed to go into landfill. “A natural fibre like cotton or wool can biodegrade and compost, but actually landfill is not the right conditions for compost. Wool leaks a type of ammonia in landfill,” she said. *1

During an interview last year with Tokyo Weekender, Rika Sueyoshi, TV presenter and founder of the Ethical Association in Tokyo, talked about why it’s essential we start to change the way we shop.

“It’s important that the youth of today realize their daily shopping habits can have a big impact on society,” Sueyoshi says. “This is something that isn’t really taught at schools so I’m constantly lobbying the minister of education to try and change that as well as running seminars myself. The purpose isn’t to preach about what people should and shouldn’t be buying, but to encourage consumers to ask questions when they shop. Of course I understand the appeal of purchasing fashionable items at rock-bottom prices, yet do you think that skirt could really be sold for ¥500 (about SGD 6) if it’d been produced ethically?” *2

DO YOU WANT TO STOP ENCOURAGING UNETHICAL PRODUCTION?

Fast fashion clothing is generally low in quality and this is very bad for the environment because of the toxic chemicals found in the fabrics. But as it looks good and is cheap, demand remains high. This has put extra pressure on factories in developing countries to produce stock quickly and cheaply, with workers working long hours in dangerous and unhealthy conditions for low wages.

The collapse of the Rana Plaza factory in Dhaka on 24th April 2013 highlighted how appalling the situation had become. The tragedy, which killed 1,130 people and injured over 2,500, could have been avoided if proper precautions had been taken. There are many recent cases of such unethical production of fast fashion. Just last year, 117 people died as a result of a fire at the Tazreen factory in the same city. Following these incidents, the Accord on Fire and Building Safety in Bangladesh was signed by hundreds of apparel brands including Inditex (Zara’s parent company), Fast Retailing (Uniqlo), and H&M. While safety checks have become more rigorous and greater transparency is being shown as a result of the agreement, progress has been painfully slow. Earlier last year, a Bangladesh factory that made clothes for H&M and JC Penny caught fire. Fortunately it occurred before most of the workers had started their shifts. *2

DO YOU WANT TO STOP CAUSING HARM TO OUR PLANET EARTH?

Cotton is the world’s most commonly used natural fiber and is in nearly 40 percent of our clothing. It is a thirsty little plant that drinks up more than its fair share of water. Even with organic cotton, it can still take more than 5,000 gallons of water to manufacture just a piece of your T-shirt and a pair of your jeans. Synthetic, man-made fibers, while not as water-intensive, often have issues with manufacturing pollution and sustainability. And across all textiles, the manufacturing and dyeing of fabrics is chemically intensive. *3

Toxic chemicals from fabric dyes have found ways to seep into our water sources. In various parts of China and India, farmers are able to predict the colour of the next fashion season by the colour of their rivers due to run-off from the textile industry. *1

Globalization also means that your shirt likely traveled halfway around the world in a huge container ship or plane fueled by fossil fuels. Your clothes continue to impact the environment after purchase; washing and final disposal when you’re finished with your shirt may cause more harm to the planet than you realize. *3

WHAT YOU SHOULD DO NOW TO HEAL OUR FUTURE

So, are you going to think seriously about keeping that piece of clothes to wear for a longer period of time? Isn’t it time to stop and consider the impact of your purchase? Ask yourself questions such as whether the clothes are being produced ethically or not? Will my buying behaviour encourage more of such unethical clothes to be produced? Do I want people in developing countries to drink poisonous water? What kind of planet earth do I want my future generations to live in?

Stop looking only at price. Start to consider whether the quality is value for money or not. Decide whether you want to “buy for wearing longer” or “buy for throwing away soon”.

Create Your Own Act of Green.

June Lin is the founder of Juneberries Haven. She loves to write and her childhood dream was to be a journalist. She writes blogs now to share her own experiences, as well as that of others to help solve some of the problems, which her audience maybe facing.

Thank you for visiting Juneberries-Haven Blog Page. We like to share articles which would be interesting, helpful and informative for our female audience, as they go through different phases of their life.